The teams were noted on the DMC website under the headings “Team S. Dudinetz” and “Team K. Reinert”. 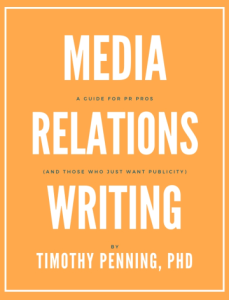 Professor Tim Penning, who teaches CAP 321: Media Relations Writing among his other courses, has self-published a book for the class.

“Media Relations Writing: A Guide for PR Pros (and those who just want publicity)” was launched last week and is available on Amazon, Barnes and Noble, and Apple Books for only $5, $10 or $15 depending on format or platform. Students in his Media Relations class this semester have been using a PDF copy for free.

“The book was written with not only students but professionals who want some guidance in the area of media relations,” Penning said.

Initial response has been good. Several professors from around the country have ordered it for their classes. Penning has also been invited to be on a panel at local workshop about media relations next spring, and the editor of PRSA “Strategies and Tactics,” a monthly trade publication, invited Penning to write an article about the book for their February special issue on writing.

Assistant professor Imran Mazid has published an article titled “Dialogic Public Relations and Social Presence Strategies of LGBTQ+ Nonprofit Organizations. The article was published in the Kentucky Journal of Communication.

In the study, Mazid, who teaches and researches digital public relations and social media,  conducted a content analysis of the Facebook posts of 33 highly rated LGBTQ nonprofit organizations. More than 29,000 Facebook posts from a two-year period were analyzed using data analysis and visualization software.

Results showed what many other studies have shown of organizational social media use. Only about 22% of the posts exhibited strategies to conserve visitors, and 38% deployed methods to generate return visits. However, more than half used a number of identified strategies to achieve what scholars commonly call a “dialogic loop” in organizational social media and interactive communications.

For the LGBTQ organizations in particular, the affective strategies of emotional expression and organizational disclosure were more commonly used than humor or other strategies to engage. Referencing or complimenting others’ posts was a strategy used less than 20% of the time. Addressing publics by name was more commonly used as a cohesive strategy to encourage interactivity and dialog.

“When both PR professionals and management personnel acknowledge dialogue as the essence of their public relations, then organizations can reap the benefits of creating collaborative and mutual spaces on social media,” Mazid writes in the article’s conclusion.

Assistant professors Robin Spring and Fang Yang have co-authored the article “Pro Tips for Advertising Educators:  How Ethnic Diversity Can Solve Creative Problems” published in the current issue of the Journal of Advertising Education.

“Racially insensitive advertising continues to offend large segments of consumers,” they write in their article. “Ethnic diversity in the advertising industry could be a solution.”

In their research, Spring and Yang conducted depth interviews with 17 advertising professionals representing different ethnicities, genders and professional advertising roles. Three themes regarding the benefits of diversity on advertising teams emerged: 1) innovation and creativity are enhanced, 2) a diverse team has a better understanding of human stories that make up so much advertising content, and 3) a diverse work environment is good for talent retention.

Given this, the questions in the study addressed why there is still a problem of lack of diversity and culturally insensitive ads. Participants were mixed about whether there is a “pipeline” problem in which new advertising professionals come from the same sources. But a lack of mentoring of minority employees and an unconscious bias were commonly sited as problems within the advertising industry.

As a result of the study, Spring and Yang offered suggestions to the industry professionals and to advertising educators. For professionals, the biggest suggestions were more intentionally raising minority interest in the advertising industry and for the top managers at companies and agencies to make diversity a priority.

To educators, based on the comments of respondents, Spring and Yang stress an emphasis on liberal arts education, including the social role and impact of advertising, as well as strong preparation in advertising skills and experience in teamwork and collaboration.

“Learning from mistakes to find a path forward will not only alleviate cultural insults but also celebrate the multicultural world in which we live,” Spring and Yang write in the conclusion of their article. “Advertising is a reflection of society; the reflection must be authentic.”

Imrad Mazid, assistant professor of Advertising and Public Relations, gave a presentation  October 31 about big data and politics at the GVSU Big Data Mini Symposium. The event was held at GVSU’s Johnson Center and was part of Big Data Month at GVSU.

After reviewing what “big data” is, its characteristics and challenges, Mazid spoke about big data in particular with regard to political elections.

Mazid also mentioned that in some cases, such as politics, social media is “setting the agenda” for the news media, instead of the traditional function of journalists setting the agenda for public discourse for society at large. In addition, political activism and mobilization on line, e-campaigning, and predicting policy positions are new uses of big data in the political realm.

Finally, Mazid, who is currently doing a research project on election forecasting and social media, said this use of big data is in its infancy. He said the current methods of predicting election outcomes with data rely on a computational approach or sentiment analysis of content on social media. He told the group at the symposium that both approaches have their flaws.

“First, these methods are not really predictions but rather post hoc analyses,” he explained. “Second, almost each study has developed its own tool for sentiment analysis or machine learning and its own technique on how to count mentions. The accuracy of the prediction should be evaluated against a clear and coherent indicator of success.”

Mazid hopes to present or publish his current study results in the next year. He also envisions starting a political campaign consultancy managed by students.